Allowing the Destruction of Life Unworthy of Life

(also translated as Permitting the Destruction of Life Unworthy of Life)

by Karl Binding and Alfred Hoche

How did an otherwise boring,  uncontroversial academic paper serve as a catalyst for some of the worst atrocities in human history 아이클라우드 사진 전체 다운로드?

Die Freigabe der Vernichtung Lebensunwerten Lebens (Allowing the Destruction of Life Unworthy of Life) was a two part treatise with contributions by German attorney Karl Binding and German doctor Alfred Hoche.  Both men were academics.  It was published in 1920 다운로드.

It provided the intellectual grounding for the Nazi T4 program, and through it, the Holocaust 슬롯머신 다운로드.

The question is worth pondering.  Neither Binding or Hoche were National Socialists.  They were not radical racists.  They were academics exploring an area of medical ethics in light of science and modern progress.  They were merely rendering their sober opinion on a delicate matter 다운로드.

Perhaps that is the explanation.

Many people are unaware of the fact that the Nazis viewed their party as simply ‘applied biology.’  Doctors and medical professionals were at the forefront of the German state under Hitler.  One of his first acts was to pass the Law for the Prevention of Genetically Diseased Offspring in 1933.  This law established “Heredity Health Courts” and these, as you may infer, relied heavily on doctors 다운로드. 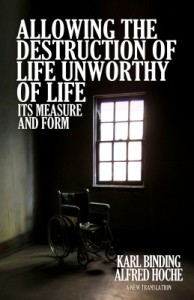 Is it possible that the Germans of the 1930s thought they were only acting on the best science and ethical analysis of the day?  They had notable men such as Binding and Hoche providing the ethical basis for their actions.  The German people were on their side (a 1925 poll of parents of disabled children indicated that 74% were in favor of euthanizing their children).  The world had embraced ‘applied evolution,’ otherwise known as eugenics.  The Germans, yes, even the Nazis, thought they were good people acting on good evidence and a solid ethical basis 큐베이스 10 다운로드.

This question is also worth pondering, because many of Binding and Hoche’s arguments are common today.  Academics such as Peter Singer, Jacob Appel, and Julian Savulescu have made identical or at least very similar arguments.  In America and elsewhere, parents abort their disabled children the majority of the time;  in some countries, such as the Netherlands, they can, and are, euthanized under the Groningen Protocol.  Genetics organizations such as the American Society of Human Genetics look to improve the ‘gene pool,’ coordinating genetic counseling programs throughout the world 다운로드.

What conclusions are to be drawn from such similarities?  First things first:  let’s establish that there are similarities.  Reading Binding and Hoche’s Allowing the Destruction of Life Unworthy of Life is a good start, since in many ways, it is what started it all 다운로드.